Where oh Where to Enjoy Weed in Public

Currently, 11 states have adult-use marijuana laws on the books. As many as 15 more states have legislators working toward recreational regulation, and experts believe that at least three of those — Arizona, New Jersey and South Dakota — will be successful in passing ballot measures this November. Yet, even with so many places where adults are not merely permitted but welcomed to toke up, many users continue to struggle to find places to enjoy their psychoactive purchases safely.

In most states, laws maintain that cannabis must be consumed on private property, away from the public eye. This makes it all but impossible for weed tourism to flourish, and it severely impacts how adult residents within certain states can enjoy their spoils. Many wonder: Am I only allowed to enjoy cannabis products inside my home, or are there other options for non-public consumption? Read on to find out.

You Can’t Smoke Out in the Open

No matter where a weed user lives or what their reasons are for partaking of the drug, it is expressly illegal to smoke marijuana in public spaces. Both in places where cannabis remains criminalized and in areas accepting of recreational use, lawmakers want to prevent those using the drug from doing it around others. It is worth noting that even medicinal marijuana users cannot toke up in public without risking serious fines and potential incarceration.

There are several reasons for these cannabis use restrictions. First and ostensibly foremost, keeping marijuana out of the public eye helps prevent the glamorization of the drug. If more people are seen using marijuana, more people are likely to try the drug to appear as part of a cool in-group — and children are especially susceptible to this type of peer pressure. Because adult-use marijuana is legally available only to those aged 21 and older, states try to do what they can to dissuade adolescents from seeing and wanting the drug. A related reason for restricting areas of marijuana use is to allow the state to maintain control over those who use the drug — particularly people of color who have always been unfairly targeted by drug criminalization.

“Public spaces” is a broad term that isn’t always well-defined, but in the case of marijuana law, it generally applies to any area which is accessible to the public. Parks, roads and sidewalks, squares, beaches and government buildings like public schools and libraries are considered public spaces, as are public-private spaces like stores. Many states go a step further, prohibiting cannabis use in view of public spaces, meaning smoking on a balcony or front porch of a privately owned residence is also against the law.

It is relatively easy to identify public marijuana smokers; not only does burning cannabis carry a particular scent, but rollies, joints and blunts have a distinctive look that marks them as different from tobacco cigarettes and cigars.

However, the same is not true of other methods of cannabis use. Vapes, edibles and concentrated oils are much more discreet, lacking the telltale signs of marijuana: the aroma, the raw bud, the racking cough that comes with smoking. As long as users can take a marijuana dose without attracting attention to themselves, they should be able to use marijuana in public (or in view of public spaces) without incurring the wrath of the law.

There Are Some Weed-friendly Public Spaces

Fortunately, many states are beginning to recognize the restrictiveness of regulations against all public use and loosening the rules to encourage weed tourism and otherwise bolster the legal cannabis industry. Specifically, users in some states are permitted to smoke in semi-public spaces, like: 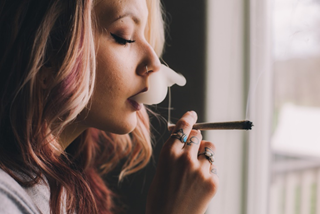 Generally, it is better to enjoy cannabis products in the safety and privacy of one’s own home — but if, for some reason, that just isn’t possible, most users should have access to some method or semi-public space where marijuana use won’t land them in jail.

3 Reasons To Add CBD To Your Skincare Routine

How to Choose the Wholesaler for Your Vape Business?

Organic Hemp Flower: Overview, and How to Buy, Use, and Store